With financing from the Nation and the province, a sector of 10 domes will be built that will be equipped with quality equipment to be able to spend the night in the provincial park. The initiative aims to provide accommodation options for lovers of astrotourism and paleontology. 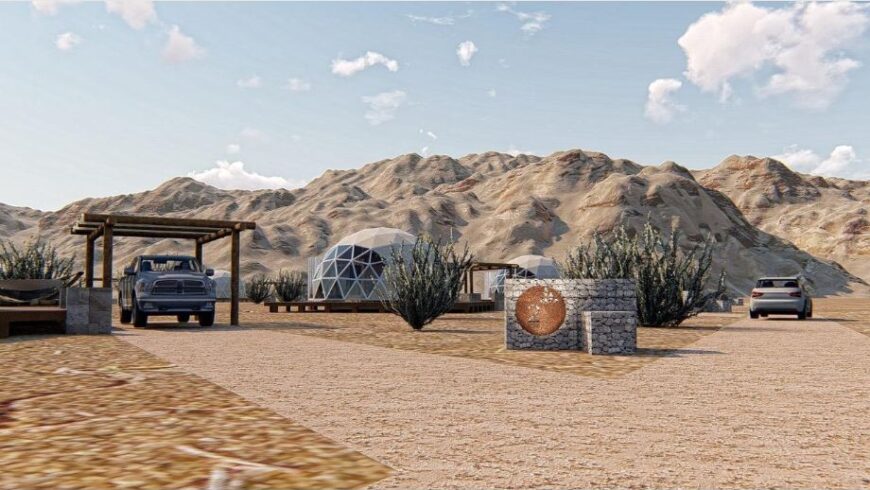 Few things can be so interesting, perhaps even so adrenaline-pumping, at least for nature lovers and paleontology fans, like staying the night in the middle of a Provincial Park as well as a World Heritage Site, such as Ischigualasto. The experience promises a nightscape petrified by the total silence of the vastness that refers to the lunar surface, a starry sky that delimits the shadows of the rock formations and even the stealthy silhouettes of the native fauna, among other images. All this in the same combo.

You will not have to wait long to enjoy it. According to the calculations of the Minister of Tourism and Culture, if everything goes as planned by the end of August, a tender could already be called and possibly in just over half a year ten domes will be ready for rent. This is so because San Juan is the first province in the entire country to get a good part of the financing through the “50 destinations” program with which the Ministry of Tourism and Sports of the Nation supports tourism infrastructure works.

It will also be the first glamping in San Juan and not only that, the first in a park of this type.

What is this all about? Neither more nor less than lightweight structures known as domes – they are actually housing modules based on geodesic spheres and the use of alternative materials – that will be equipped with all the necessary equipment to have a memorable stay. Hence the name of glamping, a global trend that is in fashion in tourism and that combines the words camping and glamor, therefore it is a proposal followed by those advocates of adventure travel and sustainable tourism that far from harming nature They intend to live in it in harmony, of course without experiencing discomfort.

Under a starry ceiling

The project has been proposed – under the name of “Eco Domo Glamping Ischigualasto” – to raise 10 domes of 43 square meters each that will have first-rate hotel characteristics. This means that each accommodation designed as half spheres, will be equipped with bathrooms with showers and all the necessary furniture and equipment. They will also have, as designed, an access porch and a wooden pergola for parking, among other details. Five of the domes will be built with accessible services such as adapted toilets, access ramp and appropriate signage.

Perhaps the most innovative architectural resource of the proposal – which will be built from a construction system of the “dry” type with rustic plaster and stone – is that these domes are intended to be made of glass to be able to enjoy the sky.

Of course, they will not have a kitchen or other elements to prepare food, because they are not intended as apart. This responds, as the official clarified, to the fact that, because it is a World Heritage Site and according to Unesco regulations, fire cannot be generated.

From the draft it has been proposed that the domes will be in a landscaped environment according to the place. They will be located 300 meters from the Welcome Square and the Park’s Operational Center, where the administrative offices, an inn-type restaurant, the infirmary, the Museum’s Interpretation Center, among other dependencies are located. That place was chosen because it is a space where there is no light or noise pollution.

But a space was also sought that has access to the existing water supply and electricity services, while the wastewater will be discharged into a septic tank that will be housed in each dome in order to comply with a biodigester circuit. who then receive assistance for sewage disposal.

The work will be carried out by the Ministry of Public Works and Services of the province and once it is finished – an estimated term of 8 months from the beginning of construction – the Administration of the Autárquico Parque Provincial Ischigualasto will take care of concessioning the administration of this accommodation.

This work will be financed by the Ministry of Tourism and Sports of the Nation for $ 70 million. The rest of the money, to cover the total investment calculated at almost 99 million, will be provided by the province.

With the 10 domes -which will have capacity as quadruple, quintuple and even sextuple accommodation- the first 50 places will be incorporated in the place, since until now it was only possible to spend the night in the place in the camping sector, as long as the traveler carried their own tents. For camping, each person has to pay a fee of 200 pesos. While the cost of staying in glamping is not yet defined. What is known is that it will not be unfair competition for the hotel sector in Valle Fértil and its surroundings.

“It is a very interesting bet because what we seek is to complement Valle Fértil’s offer. Since these 10 structures are not going to compete with the providers of cabins and hotels in the department, but on the contrary, we are convinced that they will expand the tourist demand in the area. There is a reality, the people who do this type of tourism, that is, those who are looking for a very alternative accommodation, closer to nature because they like astrotourism for example and are not satisfied with a hotel or a If they can’t find it here, they go directly to another place. What they prioritize is the experience. And now Ischigualasto is going to give them that opportunity that previously only existed in Chile, in the South and in Salinas Grandes in Jujuy, for example. But that is not all, what we are doing is to attract a new tourist for whom we will also generate proposals, discounts and benefits so that in addition to spending the night in the glamping, they stay and visit Us no, San Agustín, Astica and thus extend your stay, “said the minister, who bets on this type of traveler because not only does he have greater purchasing power but also because he expresses a great commitment to the environment and to the communities that live in the remote areas. In fact, in the whole world, for a few years, the economic movement generated by those who opt for the glamping modality and for sustainable tourism has been remarkable “.

Taytalura, ancestor of lizards, a find of worldwide impact in Ischigualasto

“International day for Monuments and Sites”